Where are we heading?

I just read ‘The End of the Internet as we know it’ by Johnny Haeusler and ‘Wir, die Netz-Kinder’ by Piotr Czerski (both in German). These two articles made me think. We have come a long way, the Internet is part of our life (Piotr does a good job of explaining who ‘we’ are).
But what’s next? ‘Where are we heading?’, Johnny wonders. Are we one step away from a divided Internet? One that’s like Facebook and offers bite-sized, easy-to-digest content? And one for the outlaws, hackers, Linux users? The thing is: Will the first one have free speech? Or are we striving towards an even brighter future with consumers living in happy symbiotic relationships with each other and towards companies? Or some dark future with google finally blackmailing everybody with all the information about them?

At first, we relly should recognize that we have come a long way. Today, technology is so highly developed that it enables anybody and everybody to do anything.

One person equipped with some gadgets (yes, I imagine this with Apple devices, come and get me) and a laptop can write texts, take photos, make videos, record audio and produce all of that into a highly polished end product. On the go.

With Spotify finally coming to Germany (I’m so excited!), music is just… available. One week into using Spotify, it feels like a hundred years ago that I actually put a CD in a CD-ROM drive and transferred the data onto a harddisk. Man, we really put in some effort back then. Spotify claims their product is simply better than piracy, and they’re right.

Apple democratizes technology by making it accessable for people who were afraid of PCs. Looking at grandparents using FaceTime with their grandchildren, no one can argue that. They ‘dumb’ iOS down to do so one could argue, but that’s what widespread adoption requires. And considering all the pro users who use their iPads for thousands and thousands of specific tasks, it doesn’t seem to hurt that much. Stephen Hackett knows what I’m saying.
(Wanna complain about the conditions at Foxconn? Read this and see why you’re wrong.)

On a larger scale, the Internet helps people to do really huge and important things. The Arab Spring shows that. Have you heard of what Telecomix does?
There’s gotta be something about this whole Internet thingy. The Internet and the technology we have today takes away everything that once stood between us and information, and therefore exchange, development and learning. Everything is affected.

Information is just all around us. Just like the force, but everyone is able to use it. When I’m looking for information, I automatically press ctrl+T and start typing. My browser opens a new tab and searches for whatever my text input is. It’s like in gaming, when you don’t have to think about which keys to press to make move xyz. If you’re not a gamer: That’s like not having to think about how to gear up or down while driving a car. Its like that, just with information. Its accessible, it s just there. Ideally, it appears in its purest state: linked, so one can reconstruct it.

I recap: The Internet combined with the devices and technology we have today means: Producing and consuming information times infinity. The sky is the limit!

Of course, and maybe that’s the most important thing to realize right now: The Internet can be controlled. Just look at China, or the conditions Telecomix fought and fights against mentioned above. By default it isn’t, but it can be ‘bad’. It can become an instrument of suppression. But just if someone makes it so. And people do, obviously. So, adding a little Internet to everything doesn’t make everything better necessarily.

To ensure that it does, we have to keep working for a free and independent Internet. There will be a new ACTA/SOPA/PIPA. 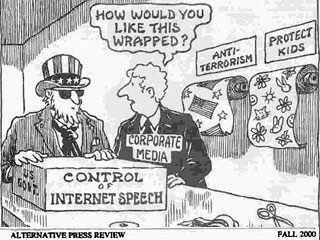