Somehow I ended up checking out a few Burrito places around town. I Absolutely love how a notable part the Irish gastronomy is engaging in Twitter. Not just the “Find us on Facebook” B.S.. Some of them are really starting or taking part in a conversation.
So, Burritos & Blues and Little Ass Burrito Bar were eager to get my feedback. I like! ‘Boojum’ and ‘Pablo Picante’ didn’t respond to my tweet, but 50% still is a good quota, I’d say.
When I went there a few days ago (thanks for the delicious Burrito again!), Phil of Little Ass Burrito was around, too. We had a nice little chat: I was mentioning that the engagement of the gastronomy in Twitter is considerably higher here than it is in Germany. He thinks that it’s because the recession hit hard here, and now everybody does what he can to keep on going. That would at least be one good thing about the recession, I’d say.
And then, shortly after that, I went in to Burritos & Blues again. At the checkout, the cashier asked me if I was on Twitter or Facebook, and I told him that I actually have had a few converstaions with the B&B Twitter account. “Oh, you’re Timm! Nice to meet you!” That was kinda cool. I had expected most of the Twitter action to come from some back office, but this was a nice surprise. Much better han havin some PR agency doing your social media for you, like it’s common in Germany, I’d say.

#nomz, brought to me by Little Ass Burrito Bar!

All or nearly all of the burrito places have student specials. At 5€ or 6,50 €, even including a drink, these are good deals around here. 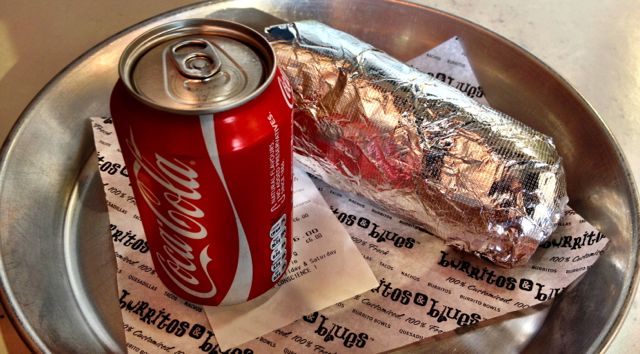 To me, Twitter feels like a much better kind of interaction than a ‘like’ on Facebook. For example: I asked about Litte Ass’s opening hours via Twitter, because the am/pm scheme got me confused a little. Et voilá, a few minutes later, there was an @-reply with a (positive, k-tsch!) answer.
But the engagement in Twitter doesn’t seem to be limited to the gastronomy. Even all of the societies of Trinity College mostly are on Twitter. Of course the last Tweet sometimes is like 2 days old, but the difference to Germany is astonishing nonetheless.

Anyway: If you’re ever in Dublin and fancy a Burrito, make sure to have saved this carefully curated list on Foursquare beforehand.